Join in the fun! Guess the “Ice Out” date for Long Lake this coming spring!

The deadline for guesses is March 1.

All those selecting the winning date will be recognized.

A final drawing from ALL participant names by an unbiased observer will select one winner of the prize donated by Monika Wilkins which will be awarded at the LLAA Annual Meeting in 2022.

Check out our historical ice data charts, if you need some help:
https://www.longlakeliving.org/p/ice-in-ice-out-data.html 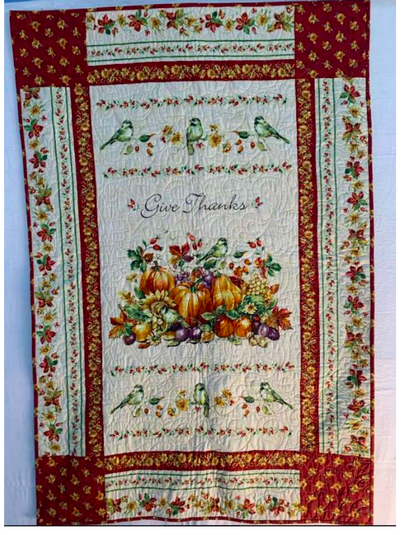 This Beautiful “Give Thanks” Quilt is the “Ice Out” Prize to be Awarded at the LLAA Annual Meeting, June 25, 2022, at the Hubbard Community Center in the Morning.

This Lovely Quilt was Donated by Monika Wilkins as the Ice Out Prize!

Intensifying the Hunt for Zebra Mussels by Jim Blodgett

Zebra mussels were first discovered in Minnesota 33 years ago in Duluth harbor, but their presence stayed below most people’s radar until much more recently when they began spreading rapidly through the inland lakes. Their presence is now confirmed in some 400 lakes with every year adding several more to the list.

The Minnesota Aquatic Invasive Species Research Center (MAISRC) on the University of Minnesota’s St. Paul campus is conducting several research projects targeted at controlling their expansion through chemical means and genetic manipulation. To help develop these long-range goals, researchers need more data about zebra mussels than they currently have, including how they spread within individual lakes. They need to know the various speeds and distribution patterns of that spread in different environments.

To that end MAISRC ran a pilot experiment this past summer. The Long Lake Area Association applied to participate in that pilot, and our lake was one of the four chosen. The basic plan was simple enough, but because the results were to be scientifically rigorous, the actual execution of the plan had to adhere to highly specific criteria. The basic plan was to install zebra mussel settlement samplers at several places in a lake and then inspect them at the end of the summer for evidence of zebra mussels. This is the basic plan of an AIS detection activity run through the Eyes on the Water (EW) program sponsored for several years now by the Hubbard County COLA.
The EW program uses whatever settlement samplers are at hand – cinder blocks, PVC tubing and tiered devices. The MAISRC project provided just tiered devices, with alternating distribution of two-tiered and three-tiered ones around the lake. The EW program depends on the individual residents to place their devices into the water sometime early in the summer and remove them sometime in the later summer. The MAISRC program required that all devices be placed in the water on the same date (July 30 this summer) and be removed on the same date (September 8). (Sharon Natzel and Jim Blodgett coordinated efforts to meet this criterion.)

The EW devices were distributed wherever homeowners volunteered. The MAISRC project required one device within each of 14 stretches of shoreline identified by MAISRC all around the lake to achieve even coverage. The EW program encourages the homeowners to check their devices for AIS every few weeks starting in August. The MAISRC protocols insisted that the devices never be touched from the time of their placement until their removal. The EW devices were to be hung from the docks such that they did not touch the lake bottom. The MAISRC devices had to be hung carefully such that the top tier was two feet below the water’s surface.

The EW project had the residents examine the devices themselves to search for any zebra mussels, but they were invited to seek a second opinion from either Sharon or Jim, both of whom are certified AIS detectors. The MAISRC pilot had the two working with Meg Duhr, a research outreach officer from MAISRC. Each device was disassembled so that the individual tiers could be examined. Each side of each plate, a total of 70 surfaces, was examined closely – sunlight, flashlight, and magnifying glasses – and carefully photographed. The plates were then securely packed up and taken down to MAISRC by Meg.

The good news is that neither the EW program with 28 volunteers reporting 2021 results nor the MAISRC one with 14 volunteers discovered any zebra mussels on any of the sampler devices. It is good that all these people volunteered to help evaluate the presence of zebra mussels. Still, three adult zebra mussels were found by the south access in the summer of 2020, so we cannot conclude Long Lake is free of them. Each female zebra mussel can produce upwards of 1,000,000 eggs a year and Long Lake is large enough and complicated enough to conceal a burgeoning population of zebra mussels. Also, the MAISRC devices were not in the water until the end of July, making for a short sample time.

There is a strong possibility that MAISRC will invite LLAA to participate in next summer’s revised version of this summer’s pilot, so if they are out there – as they almost certainly are -- we will have an improved chance of detecting them.