The article below was written by Claudia, 9th grade granddaughter of Carol Weston of Neighborhood #3, and describes some of the behaviors of the loons that she and her family have observed.

The video of the loon pitching mud in the rain was taken on May 16, 2015 at 5:31pm by Carol Weston. This mud nest was later destroyed by a predator and the loons then moved, creating a new nest as Claudia explains in her article.  The loons produced two chicks that matured to migrate in autumn of 2015.

We are hopeful the loons will return to nest successfully in Neighborhood #3 this season and beyond!

Spring has arrived, the ice is going out as I sit here watching for my friends, the loons. We watch each year as they pull mud, weeds, and sticks from the water to build their nests. We have observed that when mating time comes, they make a cooing sound like a dove. They mate on a lump of dirt and grass and then retreat to their nest to lay their eggs.

In our bay, we have never had any eggs hatch because something always gets them, such as eagles, foxes, snapping turtles, and raccoons. They raise a fuss and screech loudly when something goes after their eggs. They fooled everyone last year when they laid a second batch of eggs deep within the reeds.  We got to view 2 babies and finally can say that the population of loons is growing!
Posted by Long Lake Area Association at 4/25/2016 12:35:00 PM No comments:

Septic systems can be degraded over time by sludge build up, for example, by the use of a garbage disposal unit.  Sludge carryover can ruin the effectiveness of the drainfield.  The tank should be pumped out when the sludge becomes deep.  Also, excessive water usage can reduce the effectiveness of the drainfield.  For a full account of how to maintain an effective septic system please go to this link, from the University of Minnesota:

Let's be vigilant in maintaining our septic systems so that they don't contaminate surrounding areas.

This was not the earliest date for Ice Out on Long Lake, but this year took second place!  In 2010 the ice went off the lake on April 2nd for first place and in third place is 2000 with the ice going out on April 9th.

Once again our Facebook page was filled with guesses for when the ice would leave us.  This year we held a more formal contest with a gift certificate for the winner.  It was a tie! Congratulations to Barb Kersting from Neighborhood #2 and Scott Riemenschneider from Neighborhood #5.  Our Association President, Sharon Natzel, has contacted both winners about how to claim their prizes. 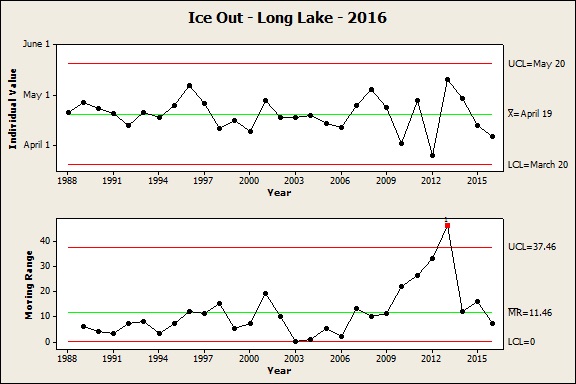 There are reports of chunks of ice floating in the north bays as of this morning.  Sharon Natzel took this video of the ice beginning to move out of her bay on Sunday April 3rd.  The noise you hear on the video is mainly wind.

As you can see in this link from the DNR, 2016 Ice Out Data, the ice is completely gone on most lakes in the area, but not from Long Lake.  Zoom in to find Park Rapids.