This page has information gathered by Lou Schultz and Sharon Natzel who are collaborating, with help from several observers around the lake, on the dates that the lake freezes over and the dates when it thaws in the spring.


Explanation of how the data is gathered:
Long Lake has some very deep spots that make exact dates for the lake freezing over difficult to calculate.  The dates for ice-out in the spring are much easier.  The original Ice-In and Ice-Out data was provided by the late Bella and John Sanders, whose home was near the mid-section of Long Lake.  They collaborated with the late Bill Anderson who lived close to the deepest part of the lake toward the North end.

Lou Schultz and his friend, Vern Campbell, work on the statistics for Long Lake based on these observations.  Their control graphs allow us to predict our future, average (mean) ice-in date as December 12.  The control limits are calculated from the data and are plus and minus three standard deviations from the mean.  The green lines depict the mean or average ice-in and ice-out. The red lines show the control limits or extremes of what can be expected.  They tell us in a stable system (no outside influences) we would only have three years out of one thousand where the ice-in could fall after January 3 or before November 20. It appears to be a very stable process for Long Lake.  These control limits are calculated from the data and show that all the dates in the last twenty-two years are within normal variation.

Click here to see chart of dates used to make these Ice-Out graphs. 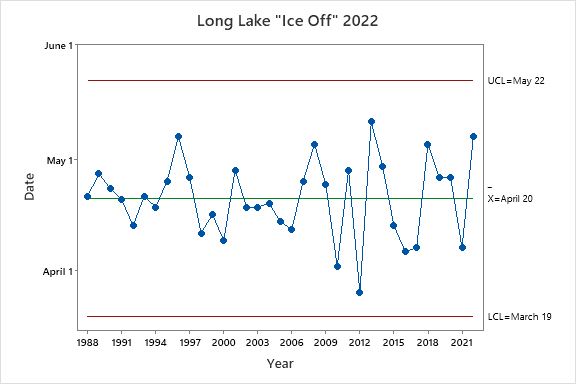 2022 Ice Out Date was May 7
According to Vern Campbell:  From the charts, the Ice Off this year was “Late” compared to “Normal”.   The  Histogram indicates that this year’s Ice Off was on the right side of the distribution.  The first chart indicates that although the Ice Off was later than “Normal”, May 7 is still within the statistical limits of normal variation for Ice Off.   If Ice Off was later than May 22 or earlier than March 19, (as indicated by UCL and LCL respectively on the chart), that would be a signal that something “unusual” had happened which was outside the normal parameters of the Long Lake system over the period that you have been collecting data.


Link:  DNR Median Ice Out Data for the state of MN

Click here to view chart of dates for Ice In graph
As you notice from the charts, this year is “about average”.  The average “Ice In” date since 1987 is December 14th while this year the date was December 17th.  A very “normal” year!     (from Vern Campbell) 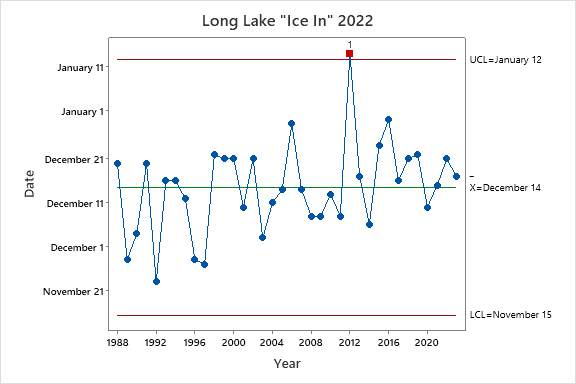 The charts indicate that the Ice In process is “stable” and it would appear to be normally distributed.   The average Ice In is December 14 with variation from about November 20 – January 14.  The “control Limits in the first chart indicate that 99.73 % of the time, you can expect the Ice to come in between November 12 and January 14 with the expectation that in a high percentage of the time (about 68%), the ice will come in between December 3 and December 25. 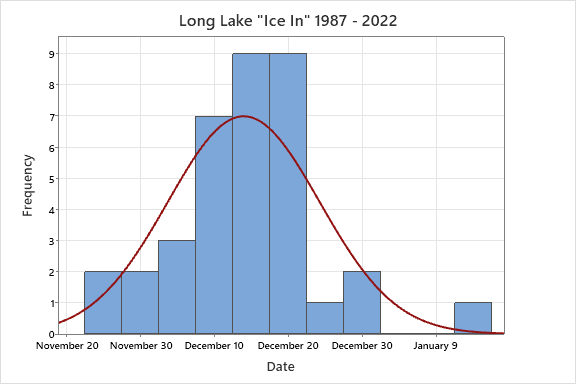