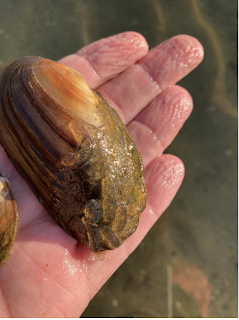 The Long Lake Association AIS representatives dropped by a few weeks ago to install a zebra mussel sampling device on my dock. In our conversation I said I should “do the math” on a sample of clams I took this spring as I raked a small swim lane at our newly placed dock and
posted earlier on the “Long Lake Leisure” FB site. This was May 15th, before the lush grass bed forms, and it was just a matter of removing the sticks that are annoying under foot.
While this year appeared to be a good one for lake clams, I recalled that when the “banded snails” moved in about a decade to 15 years ago, I believed there was a big drop in the number of clams. Encouragingly I have seen underwater sand tracks of clams regularly at our beach this year.
This is entirely anecdotal, but as a teen (I’m 60 now), I used to think nothing of scooping up a clam, cracking it open, and “hand feeding” sunnies as I put my arm in the water from the dock. They would congregate once they heard me crack it open underwater and pick away at
the meat as I held the shell in my hand. I no longer use a clam up like this. I never before found a banded snail in the sand that had a live mussel and their shell does not lend to cracking it open, so I never got to see if a banded snail was of interest to the fish.
>------------------------------------------<

So here is my effort, utilizing the faded 1941 CCC survey map above, a tape measure, and the little data I have from a 15’ wide (sandy shoreline) by 30’ long (underwater length) area.  Like the paneling behind it, the map has been on that wall since the 1970’s. We really should colorize  the topographic lines on it, or something! Consider this as exhibit 1 of my wife’s contention our lake home exists as the “Alseth Museum.” This is highly contested, but too many artifacts exist for an outright denial of the hypothesis.

The stamp above left appears to lend some gravitas to my effort, being the map is “designed to provide basic information for scientific fish and game management when used with biological, physical and chemical survey data”....so there!
The legend above right notes that the survey by CCC camp S-144 includes bottom types, so I proceeded to measure the lineal length of “sand” at the shoreline around the lake. I came up with 86.5”. The scale is 500’ to an inch, which works out to a little over 8 miles of sand shoreline around the lake (43,250’). Our factor to multiply each clam by is then:
I found:  * Sample Long Lake population
I’ll probably keep this going and see how we do in future years!
Posted by Long Lake Area Association at 1/15/2022 02:52:00 PM